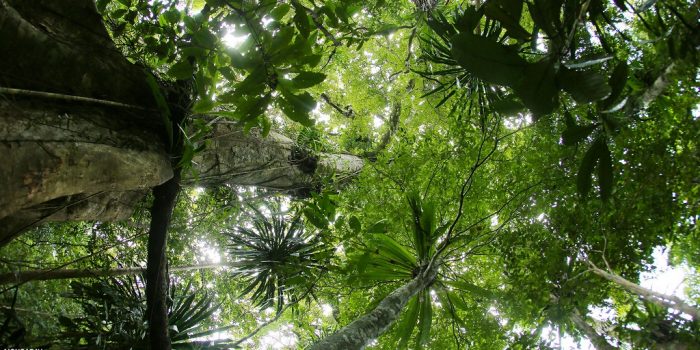 Jungles like the Amazon and forests like Russia or Canada are two of the most important terrestrial ecosystems on Earth. These tree masses that may be made up of different species and occupying different regions of the planet, share the same characteristic, the importance they have for the planet and the organisms that inhabit them. The other side of the coin is that forests and jungles also share the same threats.

The word forest comes from the Germanic Busch or busk and is defined as a place inhabited by trees and shrubs. Therefore, we can define as forest any area with a significant density of trees.

These dense masses of trees can be classified in different ways. Depending on their history or origin, primary or native forests are distinguished, which are those that have appeared naturally; the secondary forests that are those that have regenerated after a first felling and, therefore, the action of man are seen and, finally, there are the artificial forests, planted by the human being.

Depending on the type of vegetation, we can differentiate coniferous forests (for example, pines, firs, redwoods, etc.), those of broadleaved forests (jungles or jungles), and mixed forests. On the other hand, they can be differentiated by the seasonality of the vegetation, that is, whether the trees lose their leaves or not. In that case, there would be the evergreen forests where the trees do not lose their leaves with the change of the seasons. The deciduous trees where normally the leaves fall occurs in the unfavorable season and the mixed ones.

Finally, forests can also be classified according to their location and, above all, according to latitude. In this way, the forests are considered tropical or subtropical around Ecuador and the Tropics (Cancer and Capricorn). The temperate forests that are between the tropics and the polar circles and, finally. The boreal or taiga forests located near the polar circle Arctic.

What are the jungles

As we have previously mentioned, the forests are lush forests that are also normally found in tropical or subtropical climates. These are dense tree masses that house a great diversity of plant species, especially broadleaf, strong and covered by wax, they have a closed canopy shape in their canopy (light cannot reach the ground), undergrowth and various plant strata.

In turn, this lack of light and high rainfall favor the development of a humid environment where. In addition, numerous species of fungi and lichens can grow. It is estimated that approximately 2/3 of the planet’s plant biodiversity can be found in the forests.

What is the importance of forests and jungles?

Now that we have clarified what each one is, we will now explain the great importance of forests and jungles:

Jungles and forests have traditionally been considered the lungs of the planet. But these lungs are different from ours because instead of breathing oxygen. And emitting carbon dioxide (CO2), they do the opposite. Therefore, forests contribute to reducing pollution by greenhouse gases, such as CO2, in the atmosphere.

Specifically, it has also been pointed out that for example, the Amazon jungle is capable of producing 20% ​​of the total oxygen that exists on the planet and that this jungle only accounts for 30% of all the rainforest that exists. Although it is true that plants also produce CO2. The amount of oxygen they release is much greater, although the largest oxygen producer that exists is oceanic phytoplankton. Furthermore, oxygen production in forests is especially high in young forests as growing plants need more CO2 to develop.

Forests and jungles help prevent soil erosion. This is especially important since the soil is defined as the most external or superficial part of the Earth’s crust and that it is biologically active that comes from the physical and chemical changes and alterations of the rocks and the residues that come from the living beings that live in or on it. This means that the soil is a source of nutrients, it allows tree roots to penetrate the earth’s crust to sustain itself and it is also the habitat of other communities of living beings. Trees in forests and jungles reduce the force of the water when it rains. It also prevents strong torrents and reduces the effect of floods and river floods, thus preventing soil loss.

Forests and jungles help regulate the climate and temperature. Despite the fact that the plants absorb the falling water. They also release a significant amount, which is what is known as evapotranspiration.

To get a better idea of ​​what evapotranspiration is, we could compare it with the sweating of animals. High temperatures cause the plant to release the water inside it. This process is especially important in rainforests or forests where temperatures and rainfall are high. In these cases, due to the evapotranspiration of the plants. Large clouds can form, which are moved by the wind and precipitate again in other places or again in the jungle. These large clouds can cover the entire airspace of the forests. Causing the radiation of the Sun to be reflected, and therefore the temperature of the planet decreases.

Shelter and food for other living things

Forests and jungles are made up of numerous plant species and the climatic conditions that exist in them allow other organisms such as fungi, lichens, and animals to establish themselves. In these forests there are areas of light and shadows, wetter and drier areas, etc. that become the habitat of many species. In addition, there are species that have become accustomed to living in trees, in the ground, on the same trees that make up forests and jungles ( epiphytic plants such as bromeliads) and, in many cases, organisms have established mutualistic relationships with others. On the other hand, forests and jungles are at the origin of streams, rivers. And other aquatic ecosystems that suppose new habitats for other life forms.

These ecosystems also have complex relationships or trophic networks with different levels, since food sources are numerous and varied. For example, a plant is eaten by a butterfly, which in turn is eaten by a toad, this one by a snake and finally, this is eaten by an owl. Furthermore, when these animals die there are decomposing organisms (fungi, bacteria, invertebrates) that transform the organic remains into nutrients and minerals that can be reused by the producing organisms.

What are the threats to forests and jungles?

Finally, it is important to clarify that the survival of forests and jungles is threatened by human activity. Historically, forests were used to obtain food, medicinal plants and wood for human constructions (houses, tools, boats, rail, etc.). Especially the latter caused the disappearance of many of the forests that covered almost the entire planet thousands of years ago. Currently, forests only cover around 25-35% of the Earth’s surface.

After the industrial revolutions of the 18th and 19th centuries and the increase in population. The cutting of forests intensified to obtain wood, expand cultivated areas, and obtain coal, among others. It also happened that forests were long thought to be the refuge of criminals, criminals, and poachers, and unfortunately. Many other forest hectares were cut down to prevent crime.

Currently, the incessant population growth, the search for energy and mineral resources, forest fires and pollution are making the forests that still remain on the planet disappear and, therefore, endangering the existence of numerous species and ours own, since if the forests disappear the benefits that we obtain from them also will do it.

Causes and consequences of water pollution

Freshwater is a basic resource for life, probably…

10 Things You Can Do To Reduce Water Pollution

When we talk about water, we are talking…