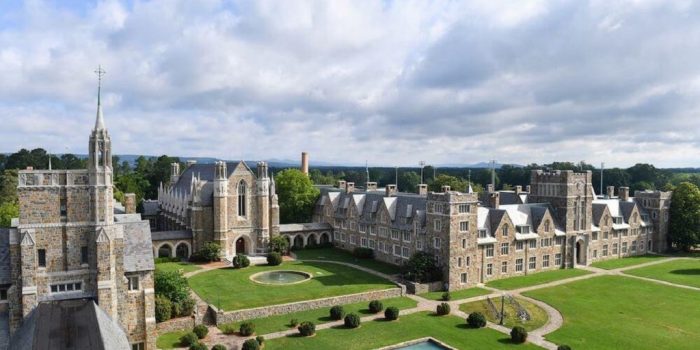 Many universities have such spectacular faculties that they are also great tourist attractions in addition to being important centers of higher education. The imposing architecture of buildings declared a World Heritage Site, the beauty of its gardens, or the scene of the filming of Harry Potter films attract curious travelers interested in history and culture. Attending class in such magnificent environments is a luxury and for sure, even if your student days seem distant now, you would not mind going back to visiting classrooms. And it is that sometimes we strive to discover unique places or original monuments and full of history and do not realize that they are much closer than it seems. Here is a selection of the most beautiful universities in the world.

Most beautiful universities in the world with large campuses

This is the oldest Catholic university in the world and the oldest in Belgium, having been built in the 15th century. Fortunately, it was rebuilt to the original design of the building and a visit is highly recommended. The library houses an exhibition on its historical past in the tower, where you can enjoy a good panoramic view of the square.

Tsinghua University is one of the most select in China and is located near the Old Summer Palace, in the ancient royal gardens of the Qing. The campus has a mix of traditional Chinese buildings with others with a more western style in an idyllic setting of green meadows, stone paths, and several artificial lakes where you can see the famous lotus flowers.

Many say that the Gilmorehill campus of the University of Glasgow is one of the most beautiful corners of the Scottish city. The main building is in the Gothic style. Nestled in a green area of ​​extensive gardens along the Kelvin River, the campus is perfect for spending a quiet afternoon strolling or having a picnic. The Hunterian Museum at the university houses fossils, minerals, and a comprehensive collection of works by Charles R. Mackintosh, a Scottish artist.

There are three most relevant university buildings: the Hospital del Estudio, the Escuelas Menores building, and the Escuelas Mayores building. The latter hides in its façade the famous sculpture of a frog. Legend has it that any student who cannot find it will not pass his exams.

Such is the beauty of this university’s campus. Most of its Georgian-style buildings are located around a lake in a wide green area next to the Appalachian Mountains. If you like hiking, you have more than 20 kilometers of trails through the forest to cover. Other highlights of the campus are the Asian garden and the Florentine-style bell tower.

Lewis Carroll used his college experiences at Christ Church College as inspiration for Alice’s Adventures in Wonderland. If you visit Christ Church, New College, or the Bodleian Library, you will surely recognize some of the filming locations of various Harry Potter films.

Built-in the 11th century, the University of Bologna is one of the oldest in the world and has been an architectural reference for the construction of other later universities. A beautiful frescoed portico, a Gothic church, and a courtyard with galleries in the building center. Stepping on this faculty for the first time is like traveling hundreds of years back in time in just a few seconds.

The Autonomous University of Mexico opened its doors in 1910. Despite its relatively short antiquity, it is a great reference in artistic studies and one of the most prominent universities in Latin America. The main campus comprises incredible modernist buildings located south of Mexico City and declared a World Heritage Site by UNESCO in 2007. Don’t miss the Diego Rivera murals in the Antiguo Colegio de San Ildefonso.

When you think of New Zealand, you immediately imagine beautiful green landscapes and idyllic rural settings. Its neo-Gothic façade and the clock tower, whose construction was based on that of the University of Glasgow, stand out in the main building. Dunedin has Scottish origins, which you can also see in the city’s architecture, which combines Edwardian and Victorian styles.

It may be that when you travel to a city, the university library is not exactly a mandatory stop on your visit, but the case of Coimbra is special. The library has a marked Baroque style that translates into floors with geometric motifs, sturdy wooden shelves, and ceilings decorated with allegorical paintings.

The venture is also full of solutions designed…